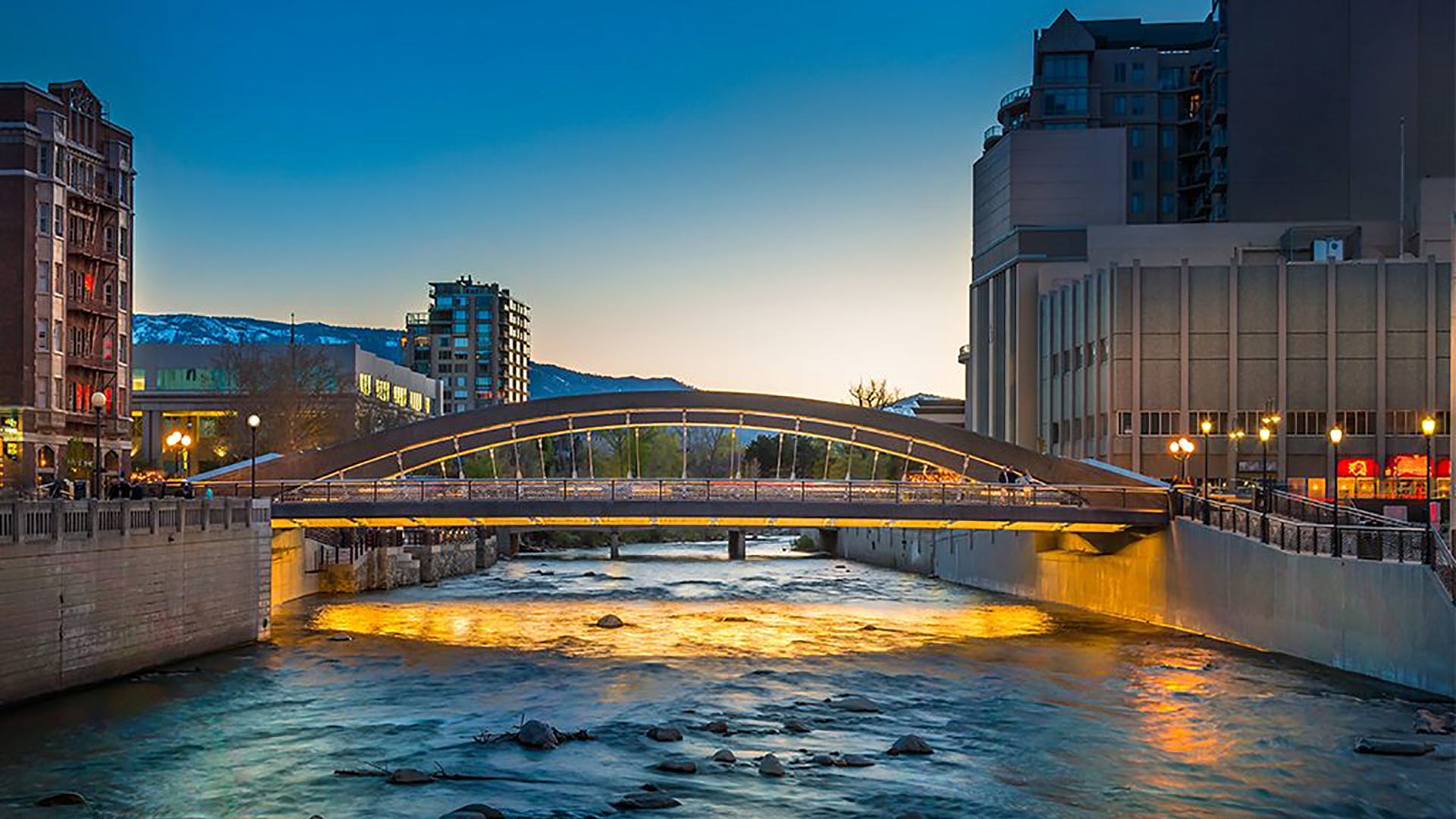 The iconic Reno landmark, the Virginia Street Bridge (VSB), has undergone a complete transformation. There, for over 100 years the VSB quietly stayed the same, carrying residents and visitors into the heart of the Biggest Little City while Reno grew and changed around it. Well past its service life, the bridge’s historical status gave way to safety and flood-control concerns.

A new bridge was set to replace the older structure to ensure public safety, improve travel for pedestrians across the bridge and also make improvements to the Truckee River’s flood capacity. The Virginia Street Bridge project included demolition of the former bridge, an earth-filled, reinforced concrete, dual-arch structure spanning the Truckee River, and the construction of a new, reinforced concrete, rigid frame, bowstring truss bridge. The project also added a river access plaza adjacent to the main City Plaza to increase recreational use of the Truckee River.

The largest team challenge was the construction schedule. Using conventional methods of construction, the bridge would require two spring-summer seasons for construction because the Truckee River is off-limits to construction activity from each October to the following May. Consulting with a noted accelerated bridge construction expert the team identified this bridge as a candidate for an innovative bridge “slide.”

The Q&D team offered significant schedule savings with their bid, planning to use an alternative means-and-methods approach on this design-bid-build delivery project. After being selected as the general contractor, the plan for the slide was approved and Q&D worked alongside the structural designer Jacobs Engineering and the bridge-slide consultant to confirm with structural calculations that the slide method would not induce detrimental stress on the structure.

As a result of the slide method, the arches and foundations were built simultaneously, significantly reducing the critical path. Crews slid the arches into place at the end of the first season, removed the falsework, and continued with construction of the deck and structures, completing it ahead of schedule in spring of 2016 instead of fall 2016. This put the bridge back in service sooner and helped mitigate impacts of the closure and staging on adjacent business owners and residents in this central location in downtown Reno.

The new bridge is 166 feet in length and varies in width from about 84 feet to 98 feet. To celebrate completion of the VSB, the City of Reno hosted a grand public parade that included vintage vehicles representing the eras of the old bridge’s service.

WB Equipment Service Corp provides Customized Hydraulic Jacking System to replace existing Virginia Bridge in Reno Nevada. Along with raising and sliding the existing bridge off to the side in order to be dismantled, the Jacking System Raised & Rolled the new bridge into place.