When New York State decided to install seismic-resistant bearings after work started on the rehabilitation of a 1 mile stretch of elevated highway, the job faced a 12-month delay while bearings were designed, manufactured and tested. But the contractor offered a solution to halve that delay by installing temporary bearings until the new ones became available.

Yonkers Contracting Co. Inc., Yonkers, N.Y., is replacing the deck and adding a shoulder on each side of an elevated section of the Long Island Expressway. After Yonkers started the project under an $85 million contract, the state Dept. of Transportation decided to replace conventional rocker bearings on top of the piers with 153 elastomeric and multi-rotational pot bearings at an extra cost of $12 million.

The job faced a shutdown because bearings could be replaced only after the road deck and existing cantilevered brackets had been removed from the 1942 structure. Fortunately, John Kolaya, Yonkers’s project manager, recalling a technique used for tensioning struts in a large-diameter shaft came up with a solution for installing temporary bearings that could easily be replaced by permanent ones. With temporary bearings in place along one side of the roadway. Yonkers could build the new cantilevered brackets and repave the deck. Kolava says that 51 temporary bearings were needed. When permanent bearings are available, 102 will be installed directly. Edward Petrou. DOT’s regional   director of construction, says the agencv had no previous experience with the technique and he is enthusiastic because it allows Yonkers to keep working.

The contractor’s first task was to lift the highway’s plate girders off the existing high rocker bearings. These main girders cantilever over the steel tower and are tied down to decrease moment forces in the main spans. After demolishing the deck and cantilever brackets, Yonkers removed the tie downs and lifting girders off their bearings with pairs of 100 ton cylinder jacks. Then workers removed the old bearings and installed temporary bearings.

Since the old bearings are about 19 inches high and the new pot bearings only 5 inches, Yonkers used bolsters to make up the difference. Yonkers welded a pair of ears on each bolster used for the temporary transfers to support the girder while workers swapped the bearings.

To ensure equal loading on pairs of ears, workers slowly raised and lowered the girder with the cylinder jacks and inserted shims to balance the load.

Later after removing each temporary bearing, Yonkers inserted another flat jack and the permanent multi-rotational bearing on top of the bolster. Then it pumped and epoxy resin binder with a comprehensive strength of 9,000 psi into the flat jack until the bearing reached its final elevation. 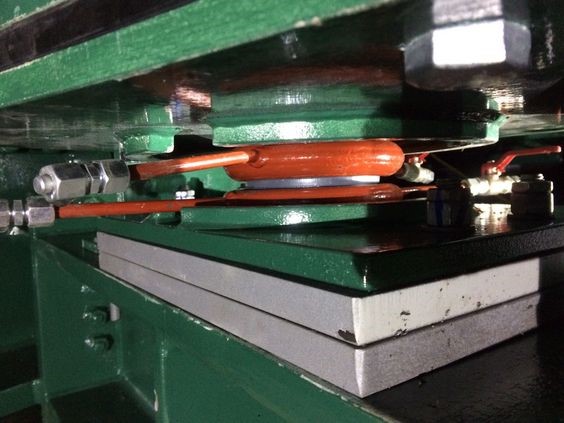